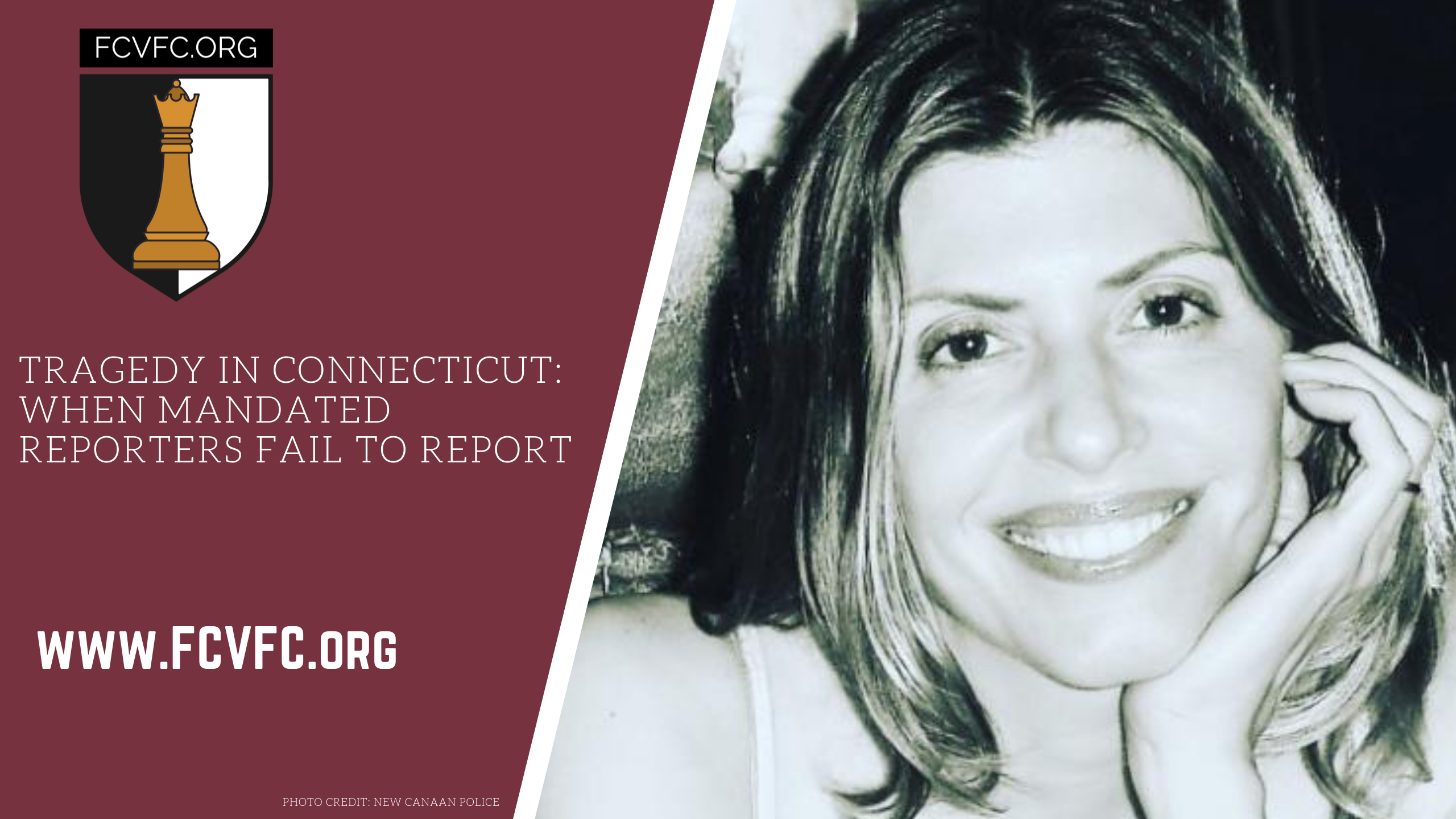 Press releases indicated that professionals in the Connecticut community knew that Jennifer Dulos, mother of five children was in trouble.

The combination of child abuse, domestic violence, threats to remove children to another country, high net worth financial conflict are not just buzz words, they are – or should be, calls to action to practitioners of conscience.

Jennifer Dulos is reported to have gone missing as of May 24, 2019, yet it was only after Forensic Psychiatrist Dr. Michael Stone of Manhattan, NY alerted police to the likelihood that she had been murdered and pressed them to take the next, necessary steps, that any action was finally taken. First, her car was found. Evidence pointing to foul play was uncovered as was evidence of a horrific murder and body dismemberment.

Ms. Dulos was represented by counsel and retained experts.  Her husband was also represented by counsel and had also hired experts. No one appears to have reported critical information, in a timely manner, to authorities, in order to have protected Ms. Dulos from the murder, nor did they take urgent action when it was clear that she was missing. The failure to act exposed her children to the potential of leaving the US with their father, seemingly a Greek citizen.

Dr. Michael Stone was consulted when it was clear that Ms. Dulos was missing. We suspect, that at  Dr. Stone’s prompting, experts were pressed into reporting to the authorities, the information in their possession, which if known in advance, should have protected Jennifer Dulos and the children.

The arrest of her husband and his paramour followed police contact.  Charges for the murder of a mother whose existence was filled with so much reason to live, and so much evidence to raise concern, to place immediate precautions into effect was finally accomplished The suffering left by her death is unconscionable and unimaginable. The outrage over the mishandling of this case must alert authorities for the need for a thorough investigation of this case.

We at the Foundation for the Child Victims of the Family Courts (FCVFC) are stricken, with the awareness regarding this case and so many others, in the Connecticut community, that if those in positions of authority simply did their jobs with honesty and integrity, so very much tragedy would be avoided. A prominent advocate in the Connecticut community stated that every victim she knows ends up dead or losing their children.

The failure of agencies like Connecticut. Department of Children and Families, who routinely take the position that whoever files a charge is likely doing so to attain a superior position for some form of advantage or other, fail to investigate and protect numerous children at risk.

Evaluators who act as hired guns, create false narratives placing children in play to the highest bidders. All such false gatekeepers are culpable and chargeable under Connecticut’s very strict Mandated reporter laws. Connecticut’s Mandated Reporter laws will send those who fail to report abuse, neglect or endangerment to jail for failure to fulfill their fiduciary responsibility.

The FCVFC will be exploring such issues as Mandated Reporters Failure to Report, Who Reports and Why, and what makes Dr. Michael Stone totally unique in a world filled with treachery, cowardice, and infamy when it comes to protecting our most vulnerable populations – children and the falsely accused suspected perpetrator.

If you or someone you know is in trouble or need help when facing high conflict issues of domestic violence and child abuse, where the collection of evidence, gaining access and cooperation of police and criminal prosecuting authorities is critical to the protection of victims, you need to contact the FCVFC.

If you are under the illusion that :

If you think that you can passively sit back and not question, confront, make changes to a losing course of the action unfolding before your eyes, be prepared to lose your case, your children, your reputation, your financial security.

Failure to report and confront the multiple forms of malfeasance that so often accompany these cases, cause us to ask clients – what do you fear most, the loss of your children and life as you have known it, or confronting the issues outlined and the need to aggressively make changes that place you in control of your case with experts who provide attorney and judicial oversight The FCVFC also provides  as extensive client support.

A bad decision or failure to correct course in the midst of high conflict divorce is fatal. The fatality may be very short term, as in the case of murder or abduction where extradition is impossible.  Long term fatality describes what happens to children transferred into the hands of their abusers, as parents see their children transformed from the people that they were and would have become.

The FCVFC staff seek to transform those challenged by terrible circumstance into leaders in the movement to accomplish the transformations.

We Evaluate – Investigate – Litigate – and we do not stop!

The Foundation for the Child Victims of the Family Courts

The Foundation for the Child Victims of the Family Courts has access to forensic experts, family mediators, attorneys, forensic law/financial experts, therapists, counselors, and other professionals who are dedicated to aggressively assisting parties who are involved in contentious custody litigation, or families who have been harmed by the abuses of the family court systems throughout the United States.

Do You Think Your Lawyer Works For You? You May Need To Think Again!