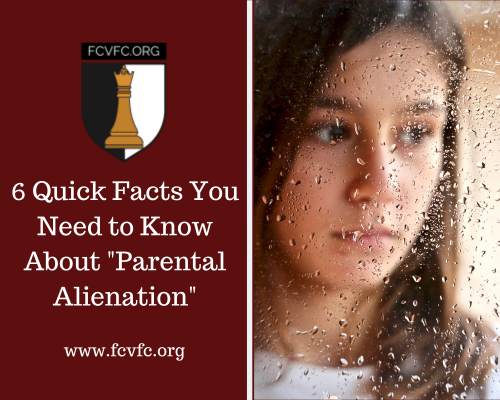 The theory of “parental alienation” (developed by Richard Gardner, MD) has been embraced wholesale by the judicial system, without substantiation.

Here’s what you need to know about it.

1. “Parental alienation” is defined as being as malignant and destructive as any act of sadistic physical or sexual abuse.

“Parental alienation,” that is, one parent turning the heart of the child away from the other parents, is described as a form of cruel, sadistic control. “Alienation” is said to rob a child of their own thoughts, reasoning powers, and logic, often implemented with punishment by the alienator.

2.The fact that the child doesn’t want to be with one of the parents is used as proof of “parental alienation.”

If a child alleges abuse and does not want to be with the parent he or she has accused, “parental alienation” is used against the child to show that the child’s mind has been warped by the protective parent.

3. “Parental alienation” is used to accuse those who have claimed abuse of being liars.

A core principle of Gardner’s “parental alienation” concept is that if one parent accuses the other parent of abuse, the child and the accuser are decried as liars.

Parents who have attempted to speak up for and protect their children, fail in their efforts. The protective parent and the child who has come forward with accusations are punished for this declared crime, barred from moving forward with defence, evidence, or proof of crimes committed.

4.The accusation of “parental alienation” makes for a swift, clean court process, saving court time and eliminating the opportunity for the vanquished parent to return to court.

These words waved over the complaint of abuse can eclipse the most egregious charges.

They can eviscerate the credibility of accusers, exonerate the accused, and almost magically prescribe a clear course of action, saving massive amounts of court time.

The process has become so effective, so concise, so assembly-line that an entire industry of lawyers and “experts” has arisen to facilitate a process understood by all participating professionals.

To the devastation of the protective parent and the child alleging abuse.

5. The accusation of “parental alienation” is used to give abusers the right to continue abusing their children.

The concept behind the theory of “parental alienation” states that if the one who abused a child is the child’s parent, then by act of genetic imprint, they have the “legal” right and power to access their children.

The authentic feelings of the child, realistically grounded, are ignored and punished. In fact, one of the stated “remedies” for these feelings of “alienation” is isolation with the abusive parent. Eventually, it is thought, the child will have a good and meaningful relationship with their abuser.

When a child is isolated this way, the result is sometimes resignation and compliance. But in no way does such tyranny produce anything resembling a healthy relationship.

6. The accusation of “parental alienation” is used to keep a child from the protective parent.

It is common these days that when the protective parent is accused of “parental alienation,” that parent completely loses custody.

If this once protective parent, the child’s defender, is even allowed to re-enter the child’s life, he or she does so in irremediably damaged, mutated form.

In this process, children are robbed of their rightful childhood, becoming demoralized, depressed, and cynical. They are placed in a position of betraying a beloved parent because they believe the parent has betrayed and abandoned them.

The capacity for unconditional love, hope, and trust in a “justice” system are crushed.

“Parental alienation” has become the nuclear bomb exercised by juvenile, dependency, and family courts, to stun potential complainants into lining up in submission to abuse.

The judicial embrace of a false narrative, upheld in litigation games and driven by lucrative rewards and the growth industry of defense for child abusers, must be identified at the onset of the case.

Professionals who betray their fiduciary responsibility to “do no harm” must be sued civilly, their licenses removed, and their ill-gotten wealth distributed to those they harmed.

Exposing and litigating these offenses are part of the work of the Foundation for Child Victims of the Family Courts.

The Foundation for the Child Victims of the Family Courts

The Foundation for the Child Victims of the Family Courts has access to forensic experts, family mediators, attorneys, forensic law/financial experts, therapists, counselors, and other professionals who are dedicated to aggressively assisting parties who are involved in contentious custody litigation, or families who have been harmed by the abuses of the family court systems throughout the United States.

You can make a tax-deductible donation to the Foundation and know that your money is going to help families in need during a time of crisis in the family court system.

LISTEN TO THE PODCAST

Listen to our podcast by clicking here.