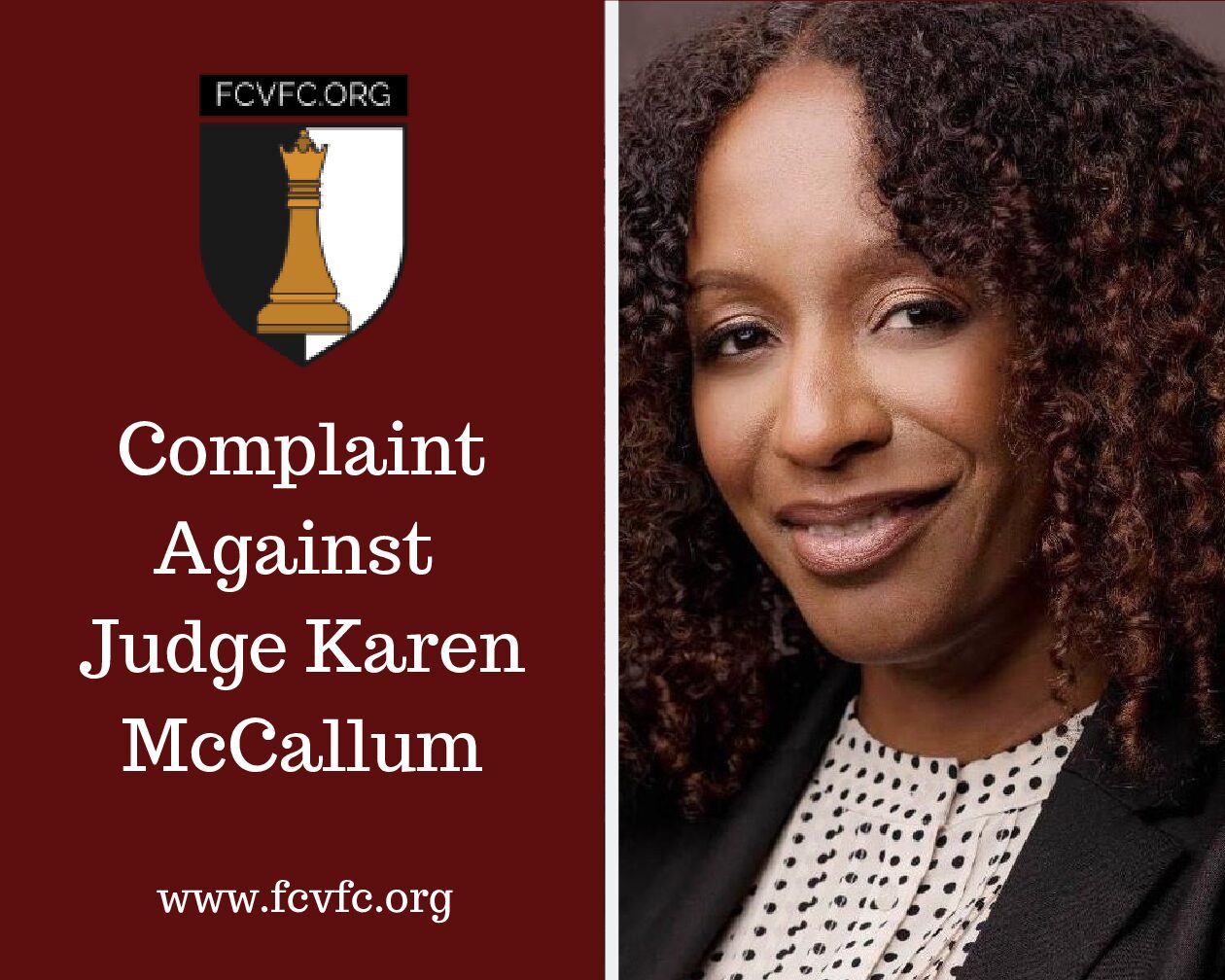 I am [name redacted], the Defendant in the case in question in the District Court, Mecklenburg County, North Carolina.

I wish to note that at the beginning of these proceedings I was represented for six months by Attorney [name redacted].  During that time, he was paid funds from my 401k to the amount of over $30,000, but he was completely useless and incompetent.

During our hearings, my attorney sat quietly while Judge McCallum and the opposing attorney (from Dozier Muller Law Group) eviscerated me and destroyed my finances; the place I called home; my career; and my relationship with my family, my friends, and most importantly my children—and whose only interest was how much child support they could extract from me.

My first appearance before Judge McCallum was Sept. 17, 2019. This hearing was a Child Support Hearing and a demand for attorney fees.

The opposing attorney at first demanded payment of $80,000 in child support fees. But she was unable to support any figure over $9,000 in fees for an uncontested divorce with an agreed-upon joint-custody agreement in place.

The recording of this hearing on September 17, 2019, will show that the opposing attorney dominated the hearing, interrupting anyone who was speaking, as she rolled her eyes, made faces, threw her hands up in the air, made noises, and spoke under her breath, with ongoing commentary, such as “That’s a lie. That’s not true.”

The opposing attorney’s behavior was never commented upon, much less censored by Judge McCallum.

As will be clearly evident from the recordings of the hearing, commentary directed at me was hostile, argumentative, and accusatory. For example, an element of the testimony was related the fact that I had been laid off from a job because the office was restructuring their organization. The opposing attorney’s comment in court was, “Isn’t that convenient.” My reply that I had not arranged for the disappearance of my job was responded to by the opposing attorney with a snarky comment to the effect that she was sure that I arranged the work termination.

Following the hearing of September 17, 2019, Judge McCallum ordered the attorneys to meet with her alone, October 3, 2019.  My attorney informed me that the judge said she believed I had been “deceptive” and she felt that she could not believe a word I had said.

At the demand of the opposing attorney, a second hearing was scheduled for November 7, where she asked my previous attorney and previous employer to testify against me.

My attorney was silent in the presence of Judge McCallum and the other attorney, but vigorous in his communications with me, that more money would be needed. In fact, he said, “Do you have any more money in your 401k that you can give me?”

The opposing attorney sent an email to my attorney that if I simply signed over my 401k to them, then the whole matter could be resolved. (Exhibit attached.)

My attorney was in receipt of my 401k, and my case completely lacked any sort of progress or fairness.  One day before my TPA hearing, my attorney retired from the case.

From that hearing forward, I have been a Pro Se Litigant, treated with absolutely no modicum of civility or decency, with no regard or respect for my basic right to a fair trial.

I am still having difficulties obtaining my recording from my former attorney, after requesting it multiple times.

After my attorney retired from my case, I concluded that when he filed A Motion to Modify Custody in March 2020, he did not file for mediation as he should have.

When the verdict was released from Judge McCallum in February of 2020, my attorney and I compiled several pages of “errors” on the opposing attorney’s Motion for Child Support, which included

I am to pay Father’s attorney fees of $25,000.  His attorney took the liberty of adding a 90-day time restraint that was not present on Judge McCallum initial judgement.

I have also been ordered to sell my home that I purchased after our divorce. In order to purchase this home, I received down payment assistance from the town of Davidson.  After I almost foreclosed I refinanced, and now I have 2 mortgages on this home.  The opposing attorney made no mention of the second mortgage in the Permanent Child Support Order and stated that if the home is not sold within 6 months, I must sign the deed over to Father.  This is not allowed by the regulations of the Town of Davidson down-payment assistance. All these conditions and stipulations were explained to the opposing attorney multiple times.

In February of 2020, my son, 17 years old, basically escaped from his father’s house and is now living with me full time.  At his request, he has not had any contact with his father or stepmother since running away.  When my son came to live with me, he was depressed, anxious, and was suffering from an eating disorder.  Since that time, his father and his father’s attorney have not only placed all the blame for him leaving on me, but they have sabotaged his relationship with his longtime counselor, they have threatened to have me “incarcerated” if he does not return to his father’s house “immediately,” and they continuously harass both of us.  In spite of all this, my son is doing tremendously better; thankfully he no longer needs a counselor, he has a stable group of friends, enjoys working part-time at a job of his choice, he can finally sleep through the night, and he no longer cries every night.

During our TPA hearing on June 12, initiated by the opposing attorney, she and Judge McCallum repeated events from the Sept 2019 hearing.  The opposing attorney dominated 2 hours and 45 minutes of the 3 hour hearing and was again seen rolling her eyes, flinging her hands up in the air, talking under her breath, and badgering me to respond to question after question.

I asked that Judge McCallum speak with my son, at his request.  The request was initially denied.  Shortly into the hearing Judge McCallum consented to allow him to speak to her in chambers several weeks after the hearing.

In addition, my Friday-Sunday visitation with my younger girls for over 8 years has been removed and we are being punished with supervised visitation every other Sunday for several hours.  I have done nothing to deserve a punishment this severe.

My biological son, 17 years old, wanted to live with his mother.  Judge McCallum is punishing me and my children for this.

Every piece of evidence to support my case that my son chose to live with me, and it was his decision, was overlooked.  The case law I presented during the hearing, which has a binding precedent, was completely overlooked.  (Had the opposing attorney presented the very same piece of case law, I believe it would not have been overlooked.)   My son is thriving now. This was completely ignored by Judge McCallum and not even mentioned.  It would be detrimental to my son to have him return to his Father’s house.  He is 17 years old and should not be forced to do this.

The courts are encouraging and supporting the attorneys’ well-played Parental Alienation game at the cost of the relationship my children and I have had.

While awaiting the Temporary Parenting Agreement to be signed by Judge McCallum and filed with the Clerk, the opposing attorney’s client refused to allow any visitation with the children.  She believed that the ruling began immediately, although the order had not been submitted to Judge McCallum for final review.

When I asked the children’s father if he would be participating in visitation, I received a text and an email stating, “On the advice of my attorney I am following the issued ruling of the judge of supervised visitation.  They will not be there.”  Later that evening when he was questioned by Charlotte Police Officers when he would be providing the children to me, he explained that he received a verbal order from Judge McCallum to “go ahead and initiate the new order” and that “the New Order would be signed on Tuesday, August 11, 2020.”  He did not provide the children for visitation, and the order remains unsigned today.  He again did not provide the children for our scheduled visitation on August 21, 2020.

My son has now filed for emancipation to again escape the threats and harassment from his father and his father’s attorney, and to be able to stay in a safe, loving home without fear of consequences from the judicial system, which has continuously failed him.  My daughters are now completely cut off from me and are also now being brainwashed and manipulated just as my son.  Their father and stepmother spend more time attempting to hate and vilify me than they do loving each other and the girls.  This is not a healthy relationship for my daughters. This is about money and payback.

I have ten years of evidence to support everything I have stated here.